Is it really the end of June? It amazes me how time just seems to accelerate the older I get. I must be having too much fun along the way. We're fortunate to live in a pocket neighbourhood with lots of bike paths, a creek and a parkway, and so are the feathered residents.

Around my house we see ducks, Canada geese, American robins, crows, sparrows (so, so many sparrows!), the occasional chickadee, house finches, sometimes an owl or two. The other week I swear I saw a Cedar Waxwing who might have been lost. It's easy for people to forget that birds are the most accessible form of wildlife for anyone, anywhere! Having lived with birds for thirty some years, I can attest that they are not that much different from people!

Last year I bought a new camera, a Canon T3i. It is so much camera - I did have a film SLR years ago, but mostly I have been using a high end Canon PowerShot, which is a great inbetween model for those that want something better than a pocket camera but can't afford an dSLR. You can get some surprisingly good photos with a point and shoot these days, although nothing beats having the lenses to take distance shots. The kit lens is just an 18-55mm lens, but, as it happened, there was a special sale on Canon lenses when I bought my camera. The salesman (who happened to be a friend) recommended a 75-300mm zoom lens since that fit my budget. He also has a Canon camera, so I can borrow his lenses too.

The best way to learn a new camera is to take lots of pictures, and unfortunately last year's flood in Calgary put the kibosh on visiting many natural places like the Inglewood Bird Sanctuary and Bowness Park. It was thrilling to be able to pack up my camera and head on down to the creek. Unfortunately for distance shots, my zoom lens was woefully inadequate. Way up high on the hill was a hawk (either a redtail or Cooper's) nonchalantly watching from a chain-link fence. The red-winged blackbirds cheerfully called from deep within some reeds. I didn't feel adventurous enough to wade in to get closer to some ducks. Oh well!

On my way back home, I spied a robin. I have been trying to get a good pic of a robin for years now. Either they don't stay still for very long, there are too many branches in the way, and the big one, I don't have a camera! This guy was happy twilling away in a pine tree. Unfortunately, he was backlit. Some day Mr. Robin, some day.

The only successful picture I had was below. I've been seeing these birds for years and always assumed they were starlings. Not so! It is a Brewer's Blackbird. He (or she) posed long enough for me to fiddle with the settings. It's not the greatest, but that just means I need to go out again with my camera :-) 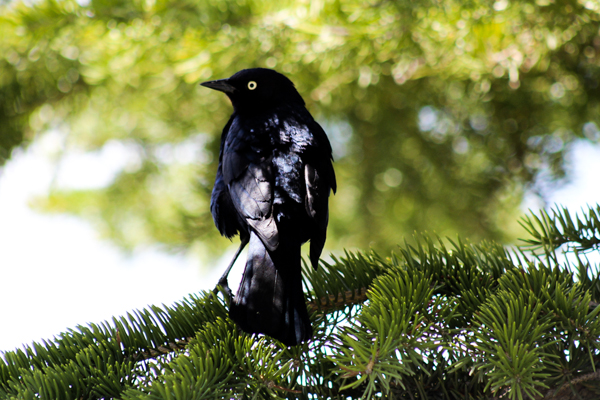