I don't think I'll be able to get a photo of my horse painting today. Tuesday would have been perfect - but a cold front came in and the house will be too dark again to take photos. It's not the only thing I want to take photos of - my purple African violet is in bloom and I believe it has hybridized with the white and pink one. The two newest violets have a delicate lacy white edge to their petals :-)

So instead I'll post two things that I'm quite delighted with. The first is belated, something that Marlene passed on to me, the Honest Scrap Award. I'll have to figure out how to get it in the sidebar :-) 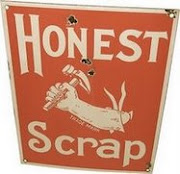 The second is Mr. Muffin's whistle. He has been with us for about three months and is finally getting comfortable in our house. He's also whistling more and I was able to get a little clip. Isn't it adorable? His clipped wings are also growing out and he's so proud of himself when he can fly somewhere.

I put the final tweaks on my yellow horse painting this morning and when it's light enough, I'll photograph it tomorrow. It felt so good to mark it down as complete today in my sketchbook.

A few people have seen it in progress, and it's not a very complicated painting. The complications came from the horse's legs (which I'm still not entirely satisfied with) and the green colour field. The original green colour more or less cancelled out the darkness of the horse's legs, and it needed to be pushed back. It really killed me on Sunday to paint out the whole area including the horse's legs. Then I discovered that the distortion I was going for was part of the problem with the legs - I ended up mixing some light blue to slim down the rump. I spent all day painting on Sunday and I found myself mentally exhausted just from the sheer amount of thinking and problem solving required.

Monday was far easier - I touched up some areas and then gave myself some time to think about it. The colours I chose were based on Franz Marc's colour theories - some of you may recall that I wrote an art history essay on one of his paintings and this was inspired by it. He called yellow the "feminine principle" and I discovered it's very, very hard to paint around yellow, nevermind mixing up the purest shade of it. There are some areas where the colours vibrate against each other and I like that effect.

Hopefully by tomorrow I'll think of a catchy name for it. My husband suggested "Horse Dodging Laser Beams" and then threw in a few sound effects to boot!
Posted by Christine at 6:49 PM 3 comments:

Merry Christmas to All!

My goodness, it's a jungle out there and I wish people would chill. If presents mean more than your presence at Christmas, you may want to rethink the holidays!

I went out to the big box plaza near our house to buy a big bag of cheap bird food for the wild birds, and ended up spending $11 on a fancy pants bag of rabbit food as well. According to the package, it has all sorts of tastes and textures that rabbits crave and will satisfy their urge to forage. It's that fancy. The clerk at Petland was so kind when I mentioned that it was for the wild rabbits that she gave me the Club Pet discount. Now that's the spirit! "They're still an animal and they need to eat," she said.

I honestly don't know what the poor critters do in winter. Last night I came home to find them in the corner flowerbed making off with sprigs of millet for the birds! One was brave enough to stay behind and it looked like he had a little cigar in his mouth :-)

I also made it out to the PO Box and found it full of lovely cards. Thank you all so much! I hope mine arrived in time :-)
Posted by Christine at 4:21 PM 1 comment:

With craft sales almost overwith, it's fun to cook again. It's also fun to have food in the house - until yesterday we were pretty much down to Coke Zero and coleslaw in the fridge! Last night we had another recipe from the Mennonite Christian Home Cookbook. One of my Mission 101 goals is to make five recipes from this book, and this was #3.

This cookbook is a particular challenge because it was published over 40 years ago and some of the ingredient sizes have changed. It also has no pictures and little instruction. With most recipes you can guess how they'll turn out even without the help of food stylists, but these are real chin scratchers. Mixing mushroom soup, tomato soup, cream cheese and crackers together is not something you'll find in the average cookbook. It's also unintentionally funny - there are three recipes for ham loaf, but only one is called Delicious Ham Loaf. There are five recipes for chop suey, but one is subtitled "The real Chinese way" :-)

So it was with great intrigue that I combined celery, cheese, mushroom soup, chicken broth, crushed crackers and chicken in the casserole dish. I crossed my fingers that an hour later it would come out tasty; after many trips to the Country Cousins restaurant out in Linden I had great faith that there is no such thing as a bad tasting Mennonite meal.

But I had second thoughts as I dished out the casserole. To be honest, it looked like barf on a plate. The diced cheese had melted and was suspended in little globs in the mushroom soup while the celery bobbed up here and there. My husband looked down at his plate and I recognized that look of fear and disappointment from the orzo loaf disaster years ago. He didn't say anything but politely dug in. To our complete surprise, it was amazingly delicious! I don't know how, I don't know why, but it just was. That's the magic of Mennonite cooking, I suppose! I could see substituting pork chops next time.

I actually cooked mine for about one hour and fifteen minutes. I just realized that there's a typo - while onion is mentioned, it's not in the instructional part. I assume that you would dice the onion.
Posted by Christine at 7:00 PM 3 comments:

Regrettably I can't participate in this month's ACEO Treasure Hunt, but my friends still are! Carole is the next blog in the loop. You can still comment here to have a chance to win. Please visit their blogs and find out how you could win an ACEO - a collectible art card.

Like everything else this year, I'm a little behind...but better late than never!

Would anyone like to exchange Christmas cards? A lot of people don't think that one should have to ask for a card, but I don't know where a lot of people live...and sometimes people move as well! If you would like a card, just leave a comment on LiveJournal. They are all screened, so only I can see them :-) You can also email me too at calzephyr@gmail.com

If you would like to send a card, you can mail it to my postal box at:

My last sale is this weekend - I think having a sit down and writing cards will be a good way to unwind afterwards!
Posted by Christine at 8:46 PM 4 comments: