I can’t believe this happened two weeks ago—I graduated! My art school held convocation on May 26 in person. It was an exciting day with a couple of obstacles at first, but I made it. I did it! To recap, I started my BFA part-time through Cont Ed in 2003 and the Alberta University of the Arts was called ACAD, or Alberta College of Art + Design. I made mplans to graduate in 2009...2013...2016...2019...but life just got in the way and it was hard to give up well-paying jobs with benefits when one has bills and a mortgage today. I even took a five year break because I couldn't keep up with work and school.

Here are all the happy grads before the ceremony. The reason there are so many is that grads from 2020 and 2021 were invited back for their chance to walk the stage and fist bump the university president. 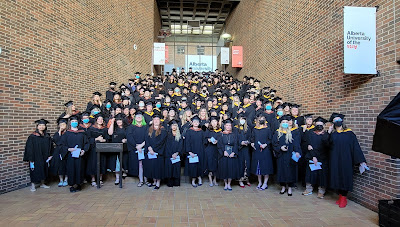 The ceremony opened with a Treaty 7 land acknowledgement, a blessing from a Treaty 7 elder and a Métis Region 3 elder along with some short speeches and introductions. For the non-locals, Calgary is situated on the traditional territories of many Blackfoot Confederacy nations. Two former grads received honourary art MFAs, which was nice to see. Her Worship, our Mayor, was the commencement speaker and she gave a great speech about the importance of creative industries, which was pretty heart-felt. Then there was the student speaker, who I didn’t know. One of the downsides of being a part-time student is that you never have time to be involved with school activities.

Then, it was time for a lot of clapping. A lot of clapping! 2020 and 2021 crossed the stage and when it was time for 2022 grads, Ceramics and Fibre were called first. It’s amazing how a moment you have been waiting for and daydreaming about comes and goes so quickly. It was akin to being married back in 2004–-afterwards it’s like, whew, all that work for one minute? But it was great! I walked across that stage, fist-bumped the president, then paused to get hugs from my teachers. They gave all the grads a little card and inside was-—a needle! Awwww! What a touching little gift.

The whole ceremony was touching for its inclusivity. Indigenous students received an eagle feather from the Treaty 7 elder and Métis students received a traditional, red woven sash from a Region 3 elder. It was so wonderful to see the celebration. Students were encouraged to wear traditional dress if they so chose, but only a few did that I saw. One grad wore a Korean outfit and a Romanian grad wore a traditional dress under her gown, which she doffed when receiving a special award at the end.

I cried and hugged my mom. “I did it!” I said and she was red-faced and crying. Dad felt he was too old to go to the grad and my brother had fears about catching COVID. So it was just Mom that showed up for me. I cried in the washroom afterwards, whether from sadness or relief or hunger or hormones I don’t know. It was just a lot in one day and all jets were running on fumes. Hungry. Thirsty. Tired. So many feels!

I returned my gown, kept my cap and we had some more snacks outside. The day was picture perfect—-just sun, no wind or grey clouds. A perfect day for graduation. We ducked back inside for the grad show and found my picture hanging on the wall. Mom said it was very nice (of course Mom would say that).

It was hard, seeing all those happy families hugging and celebrating their grad. Grads are a bigger deal now in the social media age than 1997. There was an acknowledgement and validation that yes-—your child can go to art school and it’s not an embarrassment anymore. That they can have a successful life and career in the visual arts. It had been so, so long since I had seen so many happy people hugging and loving that it was like I had forgotten what joy meant.

I cried all night. The day was overwhelming and even two weeks later--it doesn't feel real. I did it!
Posted by Christine at 5:51 PM No comments:

Post-grad life just doesn't seem to slow down! I can't believe it's June! What happened to May? Well, I can tell you a bit about May--I spent a lot of it catching up on eight months of life delayed. I reconnected with friends, re-organized my art supplies, vacuumed and bit by bit cleaned up a mess that took eight months to create. I also pushed a writing and art submission too, which was a lot of work. It's been fun to do normal things!

And, it's been fun to return to drawing. I missed draw a lot. So, what better chance to catch up on that than Junicorn? Junicorn is a month-long drawing challenge much like Mermay or Inktober. I think I'll do a daily sketch and draw a finished picture at least once a week. We'll see--I'm trying to be gentle with myself and remember that it doesn't all have to be done in a day!

Posted by Christine at 9:08 PM No comments: