How Cool Is This?

I was absolutely thrilled to get my wax seal in the mail yesterday. And even more thrilled to try it out this morning! All the talk of wax seals in A Game of Thrones made me want one, so the search was on!

At a local stationary store I found initial ones, but the font used was Papyrus, which, like Comic Sans, is considered a terribly overused font. Online searching fared better and I found a place called Seasons Creations which did not want an arm and a leg for Canadian shipping.

The seal is just the cutest little thing. The instructions were easy to follow - moisten the seal on an ice cube or cold water and light the wick and hold at a 45 degree angle to get wax flowing. It was hard to guess how much wax would be too much or too little, but a spot about half the size of a penny did the trick.

I think next time I will use cold water instead of an ice cube. When it came time to stamp, the seal was stuck to it! But it was handy to put the wick out. Now I can't wait - just imagine all the ACEOs and whatnot I can send out bearing my own purple pony seal! 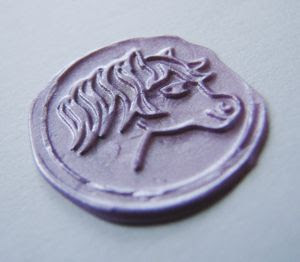 To My Crafty Valentines!

I was in a tizzy last night because it suddenly came to me what I could do for a Valentine's post. And it almost never happened too! Years ago I made a bunch of little cross-stitch patterns using a free program. I found the files and to my horror, the program spit out "Error reading file". Nooooooo! I scoured my back ups and breathed a sigh of relief when I found a GIF of this little teddy bear! It never hurts to make back ups in different formats sometimes. I made the bear into a few pins on plastic cross-stitch canvas, such as dark brown, light brown and white, but they were hard sells for some reason, so I didn't make any more. Have a happy Valentine's and happy stitching! 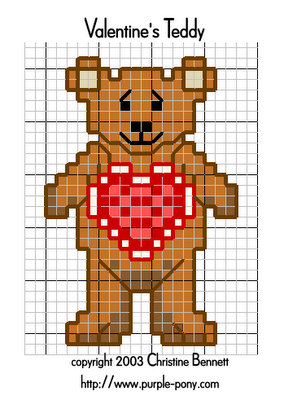 A Game of Thrones, A Clash of Kings

Part of the fun of coming to a series late is not having to wait in agonizing anticipation for the sequels to arrive. This happened with Harry Potter and now it has happened with George R.R. Martin's A Song of Ice and Fire series. Somehow this series was totally off my radar until it gained more publicity with the HBO TV series, so it was a huge surprise to me that the first book was published in 1996. I worked at the public library then, so I'm sure it must have gone through my hands at some point!

On a whim I bought the four book eBook bundle at Christmas time and started reading when I came down with a wicked cold last month. It was a good thing too, because I could literally not stop reading. I probably would have taken a day off just to finish it. I was expecting a typical, cliched fantasy saga, so I was amazed that it is more about political intrigue, mystery and deception instead.

To be honest, I didn't think there was anything exceptional about Martin's writing style. In fact there is something flat and repetitive about it - I noticed certain word pairs used over and over again which always kinds of grates on me. His descriptions of meals are always insanely detailed. But there is still some great craft going on as he divides the saga by the view points of different characters which allows parts of the story to be revealed in a very cunning way. It lets him avoid going the route of the info dump so common in science fiction and fantasy. And the cliffhangers! Wow!

I almost feel that describing any little part of the book would give away too many spoilers. It would be hard to condense the thick tomes, but basically the peace of the Seven Kingdoms is threatened in many ways and finally comes undone as characters are executed, kidnapped or accused of crimes. In the second book, A Clash of Kings, focuses on the conflicts between the many who declare themselves king of all the realm. There were some very exciting action scenes in the sequel and now I can't wait to get started on the third one, but I really do need a break from the series! Martin is unflinching in his depictions of medieval life and after a while all the killing and maiming and destruction does become onerous. I could almost pick up a romance novel before getting around to the third one.
Posted by Christine at 8:34 AM 1 comment: