When my husband took me to see The Fast and the Furious thirteen years ago, I thought it was going to be some dumb action movie with cars and explosions. It turned out to have a lot more than that! I love the film franchise and we saw Fast and Furious 6 on opening weekend. After watching the movie, I realized just how much depth this one has. Spoilers after the picture, so be warned!


What impresses me most about this movie is what an excellent team leader Dominic Toretto is, even if, uh, he's in the business of heists. A few years ago I read a lot of business and team type books and a lot seemed familiar there on the big screen. Let's see...

Dom doesn't throw his people under a bus. Ah, just had to get that one out of the way first! Owen Shaw, who leads the rival crew, doesn't hesitate to sacrifice his team members to get ahead. He even says that people are expendable and only ever get one mistake. People are just parts to Shaw, to be used and replaced. Instead, Dom unites his team under the idea of family (his mission statement, oft repeated), and family is often complicated as we see in...

One of the plot lines involves the reappearance of his old girlfriend. Letty wasn't killed as everyone thought she was in the fourth movie. It turns out she has amnesia and is working with the baddies. She is eventually welcomed back on Dom's crew after he catches her. Even if Letty did shoot him in the shoulder earlier in the movie, Dom understands the power of forgiveness. Sure, he could hold a huge grudge against her just for that, but soon after he approaches Letty with a positive assumption, even when he totally doesn't know what happened. And he gets the desired results - Letty chooses to stick with Dom, even if she doesn't totally remember their relationship.

As the fifth movie clearly showed, Dom knows there is no I in team. Most action movies feature one central character that can do it all, and it's usually one man against the world. Dom is a pretty strong dude, but he can't pull off heists by himself. He gets the help he needs from experts (regardless of their gender) and gives them all his trust and what they need to do their job. And because of that...

Dom attracts and keeps A-players. If you read any sort of business literature, you may have heard this term before - A-players are the people that close the deals and tend to be outstanding. Everyone wants top talent, and Dom's people are all very good at what they do, from improvising on the fly, hacking computers or racing cars.

So there you have it! Fast and Furious has brains as well as brawn :)
Posted by Christine at 8:54 PM No comments:

Have we ever been having a time with the weather here! This morning it is bright and sunny, but yesterday it was pretty cold and rainy. Calgary weather is unpredictable most of the time, so Mom and I bundled up with layers, boots, scarves and gloves. We were determined not to let the weather ruin our weekend! We went down to Heritage Park, a historical village, for the annual Festival of Quilts. 700+ quilts awaited us, placed all over the park. It's such a great idea for a venue, as there are plenty of things to do for the non-quilters in the family, and it's not just shuffling around a convention hall. We even ran into Bubblegum Sass and her mom.

Volunteers stood by the quilts to talk about them or hold them up for people to get a closer look, and in the case of the weather, hurry them indoors. Here are some waving in the wind near the Burnside Ranch House: 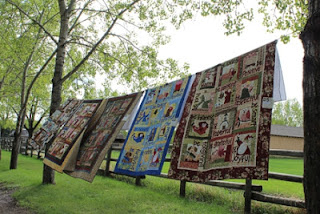 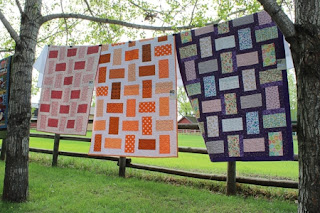 The Wainright Hotel was the perfect setting and place to stop and have a break. Upstairs a small session on types of quilting motifs was going on. The sheer variety of quilts was mind boggling! Textiles have endless potential. 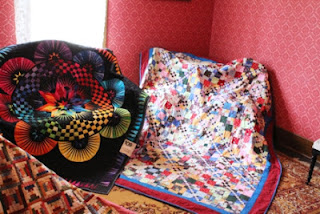 Quilts were not out of place at all in and about the Thorpe House. This is one of my favourite houses at Heritage Park, next to the adorable Sandstone House. 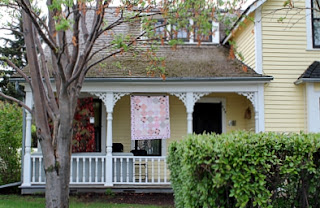 When it began to spit, we retreated into the old Gasoline Alley barn. The lighting wasn't the greatest and it was full of people trying to also get out of the rain. This was my most favourite quilt, naturally, but I wish I could have gotten a better shot. There were lots of people happily clicking away! 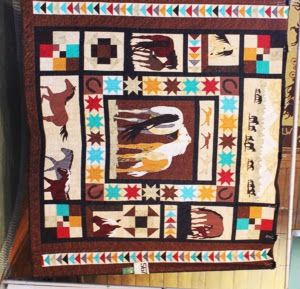 By around 1:30pm, the rain began to fall in earnest again, and between the bundling and unbundling, we decided to call it a day. I had also bought some fabric in the marketplace tent and didn't want to be tempted any more :-) Looking forward to next year!
Posted by Christine at 7:54 AM No comments:

Serious Cat is Serious, a photo by Calzephyr on Flickr.

It's such a treat to sit down and edit photos again, never mind being able to take some! I bought a new Canon camera and I'm over the moon with the zoom lens that I bought with it. Princess was a good twenty feet or so away :-)

Posted by Christine at 8:11 AM No comments:

My First 3D Print Ever!

So, just a quick post before I hit the hay (I came down with a cold, boo!), here is how my 3D print project turned out. We weren't expecting to actually have anything 3D printed in the class, because ACAD just has two MakerBots. But the teacher, Cam, worked out a deal with the polytechnic across the street, SAIT, and they printed some pieces for us. Everyone was so thrilled when the TA, Stephanie, brought in the box of pieces.

The best project was a ball bearing sort of bracelet that had free moving parts and something that looked like a Kinder Egg toy with gears. All the pieces were fragile, however. SAIT provided the invoice and my pin cost $1.77 to make. My piece was the flattest and it still had a slightly tiered look. The scaling went awry on one person's project and her bracelet ended up being teeny tiny instead of wearable. The pin back didn't fit on mine - I think there was a slight scaling problem too, so breaking my New Year's Resolution was all for naught! Still quite pleased with it though. Now I can send the file away to a place like Shapeways and have them make it in plastic or metal.

Posted by Christine at 8:22 PM No comments:

Ahhhh...I was sitting in my favourite part of house, Muffin fighting his own reflection on his stand, and I could slowly exhale. What is this strange feeling? Tomorrow is Friday, and I have no homework. No homework? Is it really true that school is out?

Last Saturday was my final rapid prototyping class. We had to pick a movie and create a prop for it - a weapon, vehicle or jewellery. I chose to design a set for Kim Basinger character in L.A. Confidential 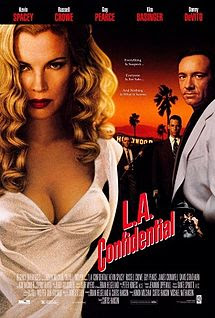 It was pretty straightforward - I made a ring, necklace and earrings based on mashing two Elizabeth Taylor designs. They turned out awesome in rendering. Everyone had to make a seven minute presentation and I was ready to puke butterflies all day! I thought we would get out by noon, but it took all day to critique everyone's designs and ask questions. It was great to see how everyone had progressed since January - Cam was able to bring out the talent in us all. Most of the props were jewellery, but one guy made a suit of futuristic armor and another made a spaceship that looked like a bird. I have so much more to tell you about this class - but for now I'm just going to enjoy doing other things for a bit first!

Once I had the heart shape, I could apply it to all the pieces. The ring was the easiest. The heart is upside down because it symbolizes the character of Lynn Bracken as being a damsel in distress. 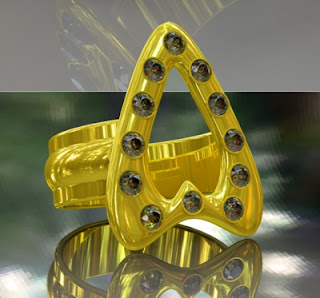 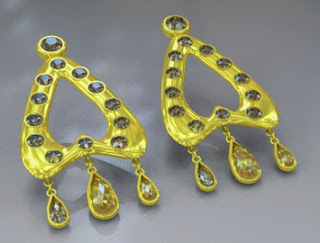 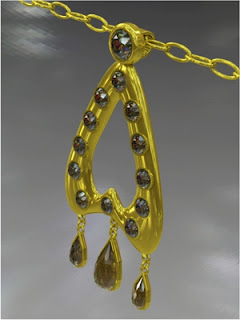 Posted by Christine at 8:11 PM No comments: