I just have to get this up with a January date stamp on it :-) For the second time, I have sent out New Year's cards instead of Christmas cards...mostly because I fail miserably at doing Christmas cards. I figure it's always nice to get something in the new year anyway. Now that I'm checking the blog archive, I realized I didn't post pictures of the 2012 cards. Gee! That's what I get for putting Muffin in charge of things. Here's what they looked like: 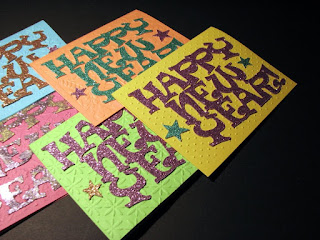 I have a Pazzles craft cutter, and after fiddling around with the text for about an hour, I found a font that I liked. The tricky part was cutting them out of the glitter cardstock. It took a while to find the right pressure - the cardstock was actually heavyweight cardboard and the chipboard setting was too light. But once that was done, it was just a little bit of glue before they were off to friends and family. If you have a Pazzles, I have posted the cutting file for sale on Artfire. Just $2 gets you cutting right away.

The pink one is the only one that was glittered on plain paper. Glittering took a surprising long time, so I quickly abandoned that. Not that the glitter cardstock was much better - glitter still got everywhere :-D

How I Spend My Tuesday Nights

Certainly not league bowling :). This English class is all about graphic novels and we're looking at a bunch of them - it helps that I own most of them too. I'm just missing Chris Ware's Jimmy Corrigan: 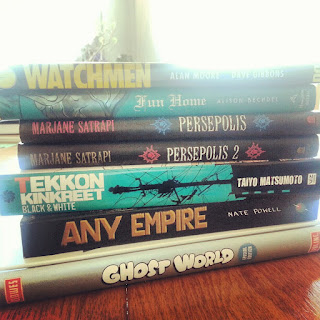 The first one we're looking at is Alan Moore's Watchmen, which is one of the most influential graphic novels of all time. It's an extremely well planned book and it would be possible to vastly under read it. There are a lot of repeating themes and motifs, and even though I have read it a few times now, there was still a lot of things I missed, including some atrocious puns. It is a violent book, but the themes of nostalgia, comics history and pastiche are very interesting. It's funny to be able to put something usually considered "low culture" into such elevated terms as "post-modern narrative of multiple voices". I better stop before I sound more like an essay instead of a blog post :-) Stay tuned for some notes on my other class!

So...how has that first week of 2013 gone? Still mulling some new years resolutions. Of course, some people don't believe in them, but I found myself thinking "less is more" mostly. Perhaps it was because I finally had a chance to chuck a lot of stuff during Christmas break. But, when you think about it, most resolutions centre around doing more.

I quickly found so many ways to get on this mantra. This is the time of year where everyone is emailing special offers. Unsubscribe from a lot of those puppies! Less email, less temptation, w00t!

It's also a good time to look at other things you may subscribe too, but these things actually cost money. I cancelled a few website subscriptions, because like those gym memberships, you find they're not being used. However, the gym membership is not something I'm giving up on. There's a World Health near ACAD and I plan on hitting the treadmill after class on Saturdays.

This might be a little difficult, but I'm going to try and stay out of Michaels too! I spend a lot there :) My husband is skeptical and so are my guy friends. It's an expensive love affair. But I have so much stash, and I'm with Craftymoose in finding more ways to use it up.

Lastly, there are those small fees that divert nickels and dimes from your savings. The bonus of this time of year is having the peace to sit down and examine a new budget. I was shocked to discover that we were paying way too much in banking fees the other night. Not just a little shock, but a big shock. We were on the wrong plan where every extra transaction over the limit was costing $1. Sometimes when thinking up the big goals, we forget about the little goals. Ah well! Back on track now. Wishing all the best for 2013... 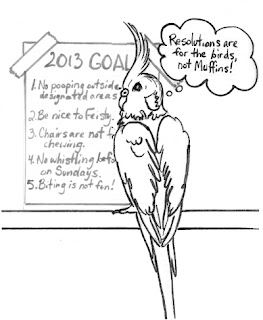 Happy New Year! It was a great sunny day here in Calgary to kick off 2013.


Last night though we wound down the year with friends. Each year I like to buy them a new board game, and this year it was Temple Run. If it sounds familiar, it's because it's just one of the many smartphone games that have made the jump offline.


I couldn't find many reviews for it online, so I hemmed and hawed about purchasing it, especially since it was $25. The good news is that it is a fun speed based game for four people. It's essentially a dice game. Players roll six dice and can re-roll before the tiki timer runs out. The player not only moves his pawn, but the demon monkey as well.


The game board is made of five square panels that get flipped and moved to create a continuous path - very clever!


We played it on easy mode and found it a little tough at first. The trouble is, it's too easy to die. If the monkey doesn't catch up to you, chances are you'll run into an obstacle. Each game we played lasted less than 10 minutes. I think a longer play time would be far more satisfying - there's lots of room for house rules here! 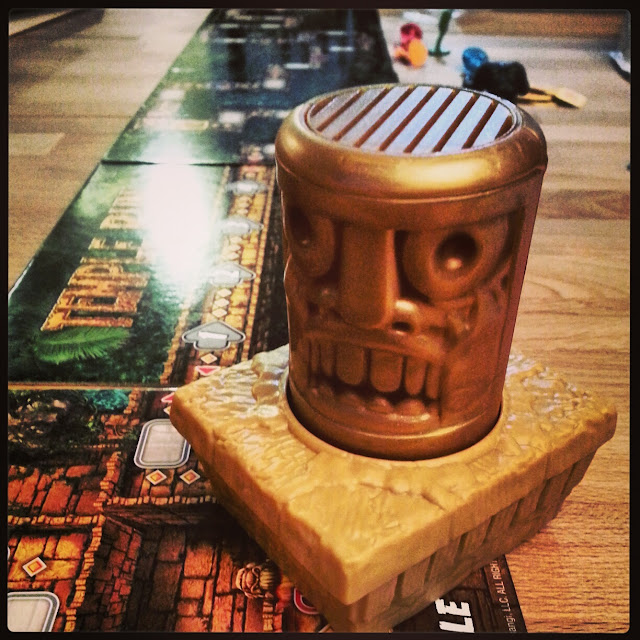