It's amazing how you can know something without really knowing anything, and I sure learned a lot about San Francisco's cable cars on our trip. We had no idea that the cars needed to be manually rotated on a turntable whenever it reached a terminus. We couldn't pass up the chance to ride a piece of history and neither could dozens of other people. I hoped we could ride the red one...but four cars went by before we could hop on. They come in blue, white, burgandy and tan as well as red. You can catch them at any point in the city, but we got on at Hyde Pier, which is close to Fisherman's Wharf and other touristy areas. It took about 45 minutes in line to get on a cable car.

San Francisco Cable Car, a photo by Calzephyr on Flickr.
It was crazy fun! The cars travel about 9 MPH and make a lot of noise. Years ago San Francisco thought about even getting rid of them. I learned about their neat history and saw the cables on action at the Cable Car Museum where admission is free. It's also pretty loud, as that's where the cables are turning endlessly for most of the day. If there is one fact you must truly know, it's that the cars are not trolleys, because they do not use an overhead line. It's $6 to ride the cable cars one way; get a one day pass for $14 and hop on, hop off to your heart's delight! 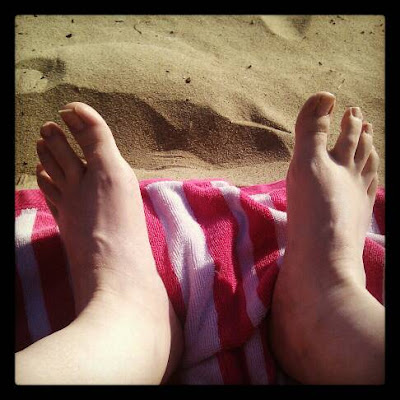 Especially in Venice Beach. My husband and I took off on an impulsive two week long trip to several points in California. It was a great time and you can bet I took my camera!

Published with Blogger-droid v2.0.4
Posted by Christine at 6:38 PM 6 comments: