Oh my gosh, I can't believe it's almost time to go back to school! For me that happens September 1st.

August's contest is really quick and easy! The prize will be a copy of my 2012 printable mini calendar, which is for sale on Artfire as a PDF. All you need is a Marvy Uchida square punch or an X-acto knife and a steady hand, and you'll have mini calendars to stick on anything and everything.

All you have to do is leave a comment below and answer these question:

How likely are you to purchase digital downloads in the future? How much would you pay for one on average?

So I did have the aforementioned crafty weekend last weekend. I made my entire inventory of pony cards for the fall season. As I get set to go back to school and practice for my road test, I'm worried I'll be scrambling to make stuff! My friends took my husband out and Muffin and I worked hard!

I took some pictures so that people can understand just how labour intensive a card can be. First, there's the ponies! The original pony card was made for my friend Noela Jewelry. I translated the pattern to my Pazzles craft cutter, but even that took some work perfecting as the software is fussy. Anyway, I cut a variety of bodies, manes, and tails.

Next comes drawing the eyes. Each eye is hand drawn and coloured with a fine marker. I use a dud pony as a template. It takes about a minute to draw each eye. Then I dot each one with a white Souffle marker to make it pop. Lastly, the manes and tails are glued on and decorated with Copic markers. By the time I got to the 30th pony, I was pretty worn out! 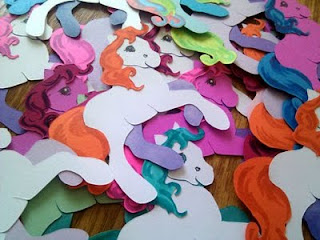 Once the ponies are assembled, I still need to assemble the cards. I cut 8.5x11" paper in half, then fold the halves, to make quarter fold cards. I use pastel colours because I like the way they show through the paper underneath. I print out a background, run it through the adhesive cartrige of my Xyron, and then stick it onto the cardstock. I could use white cardstock and just print the image, but full-bleed on scored cardstock is tricky for my printer. 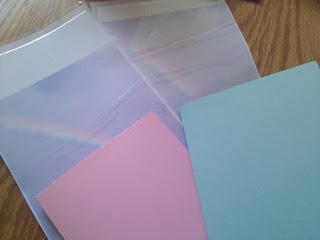 I have a few designs - clouds, a rainbow and pasture. 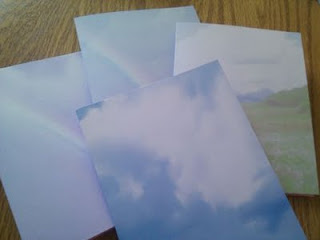 But wait, there's more! The first batch of cards featured glitter stamped onto them. The glitter, while very fun, was very messy! I tried to move away from that with the second batch, but I didn't have an ink that was metallic enough. For this batch, I took a chance buying Tsukineko Brilliance metallic ink. It's really shimmery! The only thing I didn't like was that I found the little containers hard to open and I dropped them a few times :\ 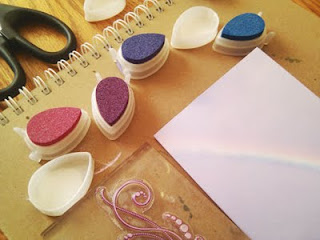 So 60 impressions later, the ponies are ready to go on the cards! It takes about 5-6 pieces of adhesive squares to secure on to a card. All the cards are blank inside, and some ponies get stickers on their rumps! Here are some of my favourites from this batch: 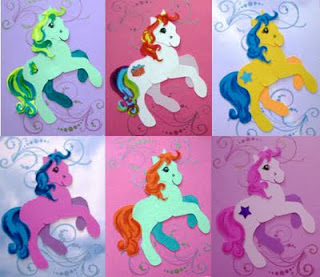 So far it seems like the most popular colour is white, which really surprised me. A few people have said to me, independently, that maybe it's because white is associated with unicorns. I dunno! We'll see what colour emerges the true winner after Christmas. 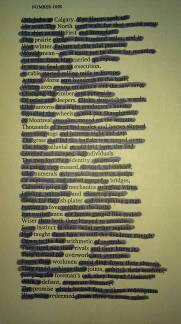 Mail art poem that I made! Apparently it's the people's poetry festival in Kensington today. I will get a random poem in the mail back.

My friends Noela Jewelry, Lisa Redfern and I are sharing a table at Market Collective this weekend.
Published with Blogger-droid v1.7.4
Posted by Christine at 11:55 AM 3 comments:

Put A Bird On It!

My friend Lisa found this video and I love it! I love how birds are on everything these days, but well...just because you love birds, doesn't mean you really love birds!

Working downtown is going to be bad for my wallet. It is way too tempting to shop and spend money - I needed new work clothes, so that couldn't be helped. Sometimes I don't have lunches ready like I usually do, so I dash out to the food court. Then there are the coffee runs...

And then there's places like Billy's News, which stocks an excellent selection of magazines. Now, us Canadians are modest folk, and we tend to downplay how awesome it is to live in Canada, but our connection to the Commonwealth ensures a steady supply of all things British, from Coronation Street to the royals. And right in between are magazines!

I forget why I was downtown when I popped into Billy's News a few months ago - I think I was hoping to find a weaving magazine - and instead I came out with two British card making magazines, Complete Cardmaking, which contains a CD-ROM with each issue, and Cardmaking and Papercrafts, which came with a free sample of paper.

This was just all too exciting - and it was pretty fun to pop the CD-ROM into my computer and play around with the graphics on it. The next issue I bought of Cardmaking and Papercrafts had a sample of Perfect Pearls glitter paint in it, and when I popped in today and saw that there was a bonus fairy stamp set, well, how I could I not buy it?

I think it's so cool that these magazines have samples and stuff. They don't even cost that much more than an American magazine. I find I like the styles better too for some reason...there's a certain enthusiasm for crafting in British magazines that others don't have. There was a special double pack of Australian paper crafting magazines, and I scooped that up too. Ah! I can't wait to rest and relax and pour over the pages! 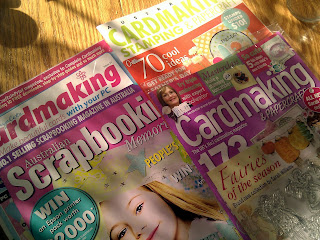 Ah, to be blogging again! It's so nice to sit down and just chill after a busy week. Last weekend was a long weekend in Alberta; Monday is Heritage Day. But I spent most of it recovering from the Inglewood Sunfest. It was a blisteringly sunny day, which was great because some very ominous clouds covered the city the night before. I managed to get a terrible sunburn despite precautions. The Sunfest is a new festival in Calgary in historic Inglewood, which is usually considered to be Calgary's first neighbourhood. 9th Ave was shut down for several blocks and it was fun to just see people come out and play! There were street performers, a little classic car show, lots of food and much fun.

The best part was that my friend and former co-worker Bubblegum Sass came down to see me and help watch the table. Even better, she took pictures of the table! This is something that a lot of people forget to do! You can see the pictures up on her blog at the above link :-)
Posted by Christine at 7:46 PM 2 comments:

Morning peeps! Sorry this is late. It is so hard for me to get bakc into the work routine. Suddenly I have to get up earlier, get dressed (in nice clothes), wrangle lunch and make the 50 yard dash for the bus again. It's amazing how out of practice one gets :-D

Say congrats to Angelself and Kathy!

Now off to catch the bus!
Posted by Christine at 5:36 AM 7 comments: