We did something extra special on Saturday - attend the Calgary Mini Maker Faire! It seems like a Maker Faire was something I could only dream about and wistfully sigh about when mentioned on Twitter. The Faire had everything going right for it from the admission price ($10 student yay!) to the location at the Alberta College of Art + Design. It was the perfect setting with displays on the main mall and some of the painting classrooms used for fun stuff like a kids activity centre, zombie make up workshop, and Protospace member projects. One room was labelled Blinky Stuff and it did not disappoint. Not only were there homebrew projects and 3D printers on display, but also old timey crafts and artisans. There were steampunk sculptures and clothing, and a fibre arts booth. I was able to sit down and test out the Cricket loom. It's one thing to see it on the web, and another to get a feel for it in real life. The other The coolest thing about the Maker Faire was that it was very kid friendly. There were lots of little girls running around and I'm so happy the parents took them there. It's often bemoaned that there aren't enough women in STEM careers, but what a great way to give them an introduction to the world of tinkering and technology. My husband also loved it too. He was really excited talking to makers about their 3D printers or circuit boards. He's the biggest nerd I know, but doesn't get out and network a lot. Somehow I get the feeling that the next Maker Faire won't be so mini! Here are some Instagram snaps I took (in case you're wondering, the photo on the left is a 3D appetizer printer that uses cream cheese!) 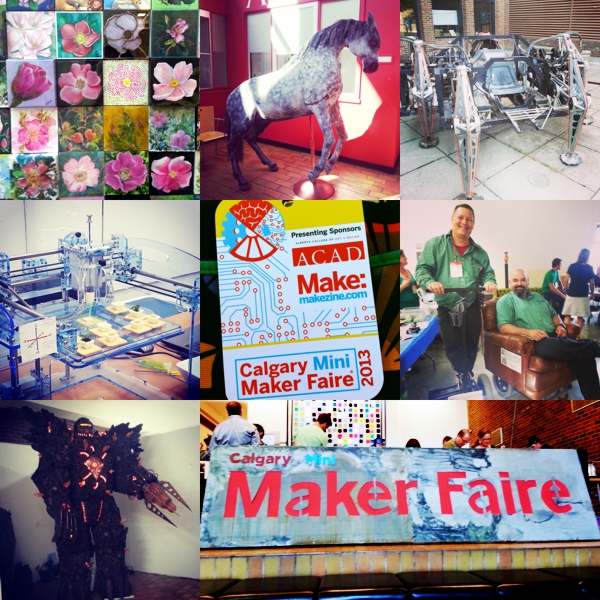 Posted by Christine at 10:05 AM No comments:

I go back to ACAD on Tuesday...we've spent August trying to cram as much summer as possible into one month. June and July were such downers, but I did a lot, and the proof is in Instagram :-) 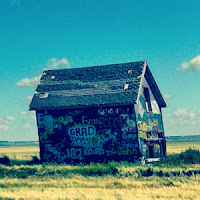 We went for a lot of country drives! This graffiti barn is out near Linden, Alberta. It never looks the same. Linden has a great little restaurant called Country Cousins, although it's not quite the same as what it used to be. It used to have a buffet loaded up with Mennonite home cooking, now it's just OK. The farmer's sausage is still wonder as are the homemade pies. 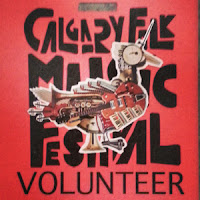 I volunteered for the Calgary Folk Music Festival again! They really treat their volunteers wonderfully and it is such a good time. It takes 1500 volunteers to make the festival tick, and is a lot of hard work! But there's a free t-shirt, snacks, gelato, two meals a day, program and free music to sweeten the deal :-) The hot band this year seemed to be The Mexican Institute of Sound. 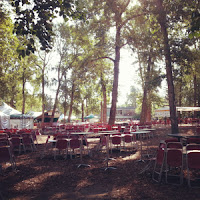 The festival takes place on Prince's Island Park, which was overcome by the flood back in June. 250 volunteers made it possible for the festival to happen. The whole island was underwater, the River Cafe was temporarily closed and it's amazing they were able to get it done in time. Some of the stage areas were closed, and Stage 2 was moved to nearby Eau Claire market. There was a fine sand everywhere due to the silt...but the river ran blue again by this time at the end of July. 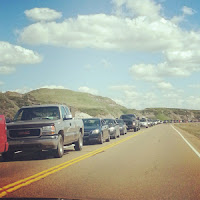 We tried to go to the Royal Tyrell Museum on the August long weekend, but had to bail! This was the line up of cars just to make the turn off into the road to the parking lot. We had arrived there around 3pm, and thought that would be a good time to miss the crowds. Apparently not! Ah well...it was still a nice drive. We'll have to go again when all the kids are in school. One of the problems with Calgary is that you have so many people fleeing the city for long weekends - can't be helped, really. We were looking forward to it as the last time we were there was 2007. 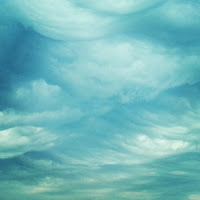 Saw these groovy clouds around Red Deer! They were originally grey, but I love how Instagram turned them into waves. I really like Instagram as a creative medium...it's like this random result that I can use for drawings and paintings. In the 30 years or so that we have been travelling Highway 2 between Calgary and Edmonton I have never seen clouds like this. 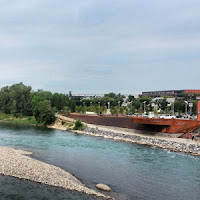 Here's a view from the 10th Street Bridge last week. The water is still high. There's an island near the bridge where geese nested, but it's still underwater. It's hard to imagine just how devastating the flood was. It will be a long time before everything is "normal". The rusty looking structure is called Poppy Plaza and was intentionally made to look that way. It's next to Memorial Drive. 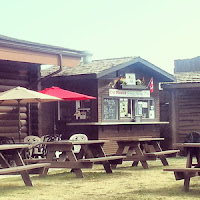 Lastly, a new farmer's market opened up near us. Most of the farmer's markets in Calgary are far south, so it's always a chore to get to. This one is located at Symon's Valley Ranch, which used to be a restaurant and dance hall. It's been fixed up some with outdoor seating and lots of shops inside and out. It has only been open for a couple of months, so it will be cool to see how it grows as more people and vendors know about it :-) There were live geese and ducks there to see, and lots of seating, so it should be good. It's also literally out in the country too!
Posted by Christine at 2:43 PM No comments: