I'm feeling pretty proud of myself because I'm finally ahead of things, not behind. Here's where you can find me this Christmas craft sales season in Calgary. Along with MasterCard and Visa payments, I can now take Interac payments too. Come out and say hi and shop local!

If I'm not in your area, check out CalgaryCraftSales.com to find a sale near you!
Posted by Christine at 10:44 AM 3 comments:


I gotta get better at writing about events before they happen! But with the preparing, packing, printing and promoting, the peace and place to pontificate doesn't often happen. 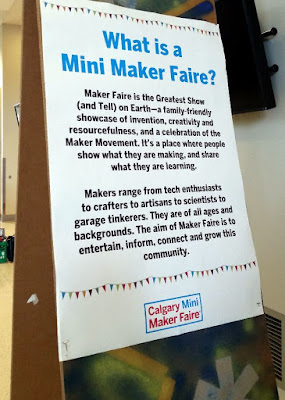 I jumped at the chance to be part Of the Calgary Mini Maker Faire when I saw the ad on Facebook. I had previously attended Maker Faire but had never thought I would have something to show off. Then I remembered the presentation that I did for my fibre class about knitting machines. I have three of them! With this realization, an idea was born and I applied.

When the acceptance email came through, I was super jazzed. Time to prep! As the big weekend approached, I became kind of nervous. What if people thought that knitting machines were no fun? What if no one wanted to talk to me? I would be sitting there all day Facebooking or something.

I had no reason to worry - the table was immensely popular. It was just me manning the table and I had lots of people of all ages who wanted to take a try at the knitting machines. I had brought a dozen balls of yarn and it wasn't enough. Despite all my planning, I didn't guess that some would like to make and take something on the knitting machine.

By the second day I was starting to lose my voice and I had to change the table up so that only I was using the knitting machine :D As they say, you don't know what you don't know and if I return next year I will bring Mom or a friend so I can look at the other exhibits.Fortunately the volunteers and organizers made the whole event run so smoothly that it was a great experience all around. Maybe I will even have a different idea too! 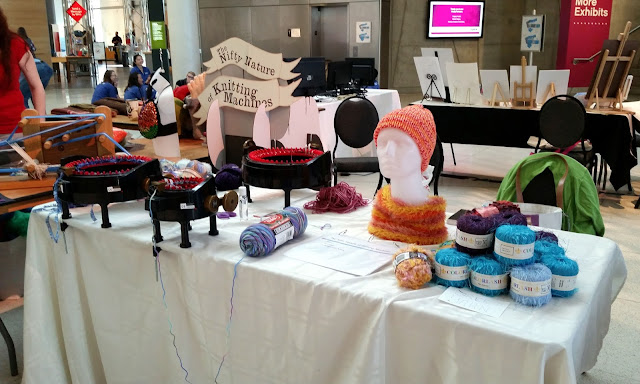