I was hoping to do some machine sewing tonight for our next project - a fabric collage! But I actually spent the time ironing pieces and loading bobbins.

The results of my natural dyeing are on-going and interesting to say the least :) I think I can cover everything in at least three posts!
Published with Blogger-droid v1.6.0
Posted by Christine at 7:40 PM 3 comments:

Today I learned about natural dying techniques in Fibre 2D. Our first project is to dye some cotton swatches and make two silk scarves. The process is rather long and involved, as we have to roll up the material in plastic and essentially let the die release over time as the material decomposes.

Some of the suggested dye sources were tea bags, flowers, berries, leaves and rusty objects. I couldn't find any rusty objects, but there were plenty at school. While I'm not sure how the leaves will turn out, the berries definitely did the trick! I also made a cup of raspberry tea in the morning to make sure I had a tea bag handy. 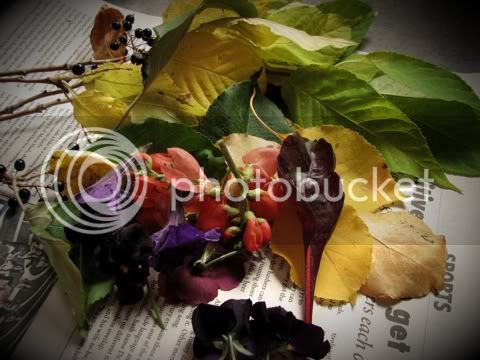 I'm hoping and praying for more chinooks this year - they're a warm weather phenomenom unique to Southern Alberta. A chinook can pass through town and melt snow *like that*. It reached 2 C the other day and I have been covering and uncovering my mini roses in anticipation of frost and snow.

My friend Noela Jewelry and I are done for the Hillhurst Sunnyside Farmer's Market. We had to bow out of the last time on September 1st, due to rain...rain that magically stopped after we left! We just couldn't win with the weather this summer, and although the market graciously said that we could come back for another time, it's too cold to stand out there for four hours in the evening!

But, it was not all bad...I wrote a blog post for the Alberta Etsy Team about being prepared for outdoor sales.

And I'm looking forward to my indoor sales this year! They are all booked and I will be posting the schedule soon.
Posted by Christine at 9:07 AM 4 comments: 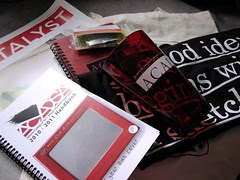 ACAD Swag
Originally uploaded by Calzephyr
My first week at school (on top of work and real life) has really been quite nutty! But here's some of the fun things I received in my first year welcome bag.
Posted by Christine at 7:16 PM 3 comments:

My first full day of classes is September 13th and it seems I'm very slowly getting there. On Thursday I picked up my official ID card and went on an earlybird tour.

The tour was led by a fourth year mature student and it was actually pretty fun. I really didn't need to go, but I just enjoyed following everyone around. There were also people here and there fixing lst minute things. I really like the rhythm of schools, especially when they wind up or wind down for a semester. I met a gal from Idaho and it was just kind of cool to hang around at the back and observe how excited and nervous the younger crowd was and how they all differed. There were a couple of nerdy girls, some kids that wore their artiest artist clothes, a hipster and a suave Hispanic man with a purple shirt, orange-brown leather jacket and white pants. He was a real standout :-)

It turned out that I didn't qualify for the discounted bus pass, and I didn't realize I had to add a locker as a course number. Eeek! I was able to sign up for that, but not get the locker number or combination because it wasn't in the system long enough. So now that I have my official ID, I can apparently get a 10% discount at Kensington Art Supply and free admission to the Glenbow Museum. I hope there are other rewards in store :-)

Here's a pic I snapped while on the tour. The legendary graffiti stairwell at ACAD has been around for decades and will probably be around for decades to come. It's always changing and one picture doesn't do it justice. ACAD actually pays a fee to the fire department because of this stairwell. There are regulations about solvents indoors, and it's just easier to pay the fine than try to stop an old tradition.