Twelve Weeks Goes By So Fast--That's A Wrap!

It's funny when you're finishing up school--excited for the future, anxious in the moment and relieved when it's over. How does 12 weeks go by so fast? I had so much time in January! I also swear semesters used to be 15 weeks.

My last Thursday class was tough. I was so exhausted—I stayed up too late and got up too early—and when my turn came around, I kind of flubbed the delivery. But, the semester is done like dinner. Time to put a fork in it ;-D. I just have one assignment to hand in and that’s it. I’ll be back next week to drop off my piece(s) for the grad show and then won’t be back again until convocation in May.

I expected the last few classes to be wrapped in some kind of sentimental, nostalgic montage of feelings and experience, but there were none. There was mostly a lot of thirst and hunger. I didn’t have lunch until 3pm on the last Wednesday and when Thursday’s class was over, I wolfed down a cheese bun and a buffalo chicken wrap. It takes a lot of calories to simply stay awake.

I’ll post pictures of my work in the coming days. Mostly I just want to rest and clean up around the house. Every horizontal surface has been fair game for the past three and a half months and it felt so rewarding to simply vacuum yesterday and not step over a giant pile of art supplies to get into my office!

Studios have to be cleared out by the 22nd and I grabbed everything in one trip last week. Already it feels so weird to not have any homework. I completed three writing assignments, eleven projects, learned a lot about papermaking, started a couple things over twice and generally worked a lot more than I normally would at my own pace. Two of the projects were kind of turds and one of those will go in the recycle bin, heh!

I still journalled my adventures and will get this blog all caught up in the coming days. Stay tuned! 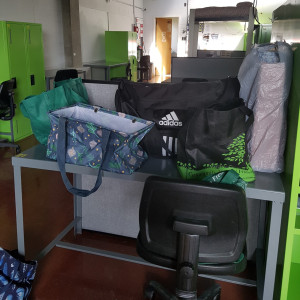 Posted by Christine at 4:22 PM